Is West Five's Eve Park the development of the future?

READ AT THE LONDON FREE PRESS

Eve Park looks like something out of a science-fiction film from the 1970s.

The community — part of the Sifton Properties West 5 project, billed as a village within the Forest City for the ecologically-minded and want to help fight climate change by reducing their carbon footprint — is designed to be built on a series of ringed condo neighbourhoods that blend into the natural environment.

The company behind Eve Park, S2E Technologies, says the sustainable development won’t be just a place to live, but a way to live, too. This means it will include such features as a garage where autonomous electric cars can be shared by residents, as well as solar panels galore.

“We’d really like to make a difference and save the world,” said S2E’s co-founder and CEO Milfred Hammerbacher. “I think it’ll be a great opportunity for London.”

“Eve Park is the first neighbourhood of its kind,” S2E says on its website. “It marks a reset in the relationship between people and automobiles, and between automobiles and living spaces.”

The company recently began outreach on Facebook, seeking London individuals and families who would like to be part of Eve Park – even though it’s just now securing the necessary land from Sifton.

“We are going to buy a piece of the land. We had a lot of doors close on us, until we knocked on Richard Sifton’s door,” Hammerbacher said.

He said the initial response to the social-media campaign — which will be followed up with a more formal announcement soon — has been “encouraging.”

Of course, there have been many builders who wanted to create what they envisioned as homes or communities of the future — and we now, with the benefit of hindsight, laugh at their designs because they look so outdated.

Hammerbacher said it was 10 years ago when he last went to Walt Disney’s Epcot Centre, which was supposed to provide a blueprint for how to live in the future back in the 1980s. He noticed the solar panels looked out-of-date. “Holy cow, that did not look futuristic to me anymore,” the businessperson said.

Ideally, S2E would like to start construction on Eve Park in the latter half of 2020.

“So there’s still a lot to do on this,” he said. “Essentially, we have a concept for Eve Park.”

The design was supplied by Turkey-born architect Dror Benshertrit and the Gensler firm. Future occupants can opt for one-, two-, three- or four-bedroom units.

According to Hammerbacher, Eve Park won’t address merely where Londoners live, but also how they travel – since that can have such a big impact on carbon emissions.

“Transportation is probably a bigger thing to tackle,” he said. Asked if his company has had any interested from car companies about forming partnerships, Hammerbacher said, “We’ve been in discussions with a lot of different folks in the area.”

He admits some people look at him like he’s mistaken when he says he wants to change the world. “We really want to try something a little bit different here,” he said.

Written by The London Free Press 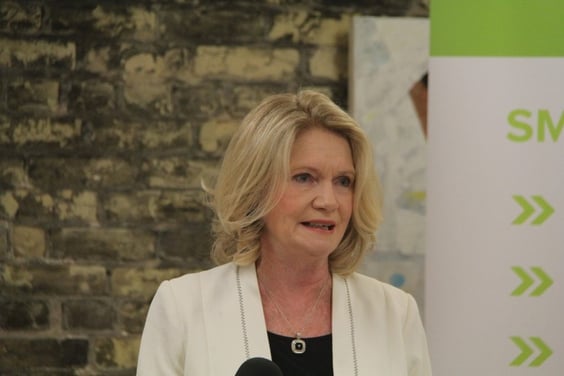 London test of automatic valet for shared electric vehicles gets $2.4M from feds